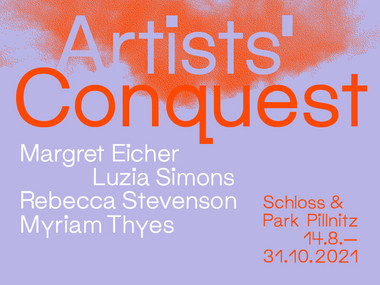 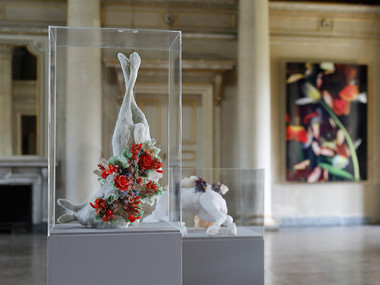 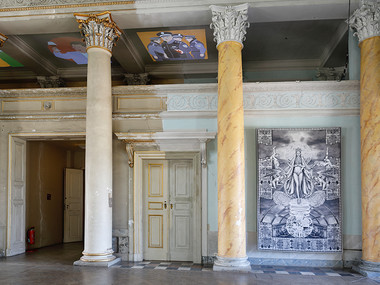 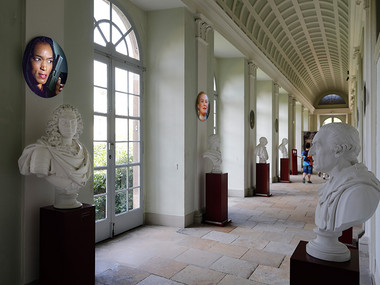 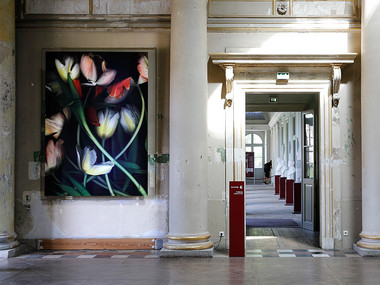 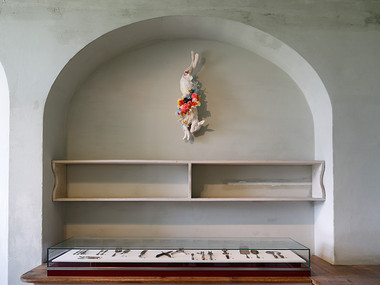 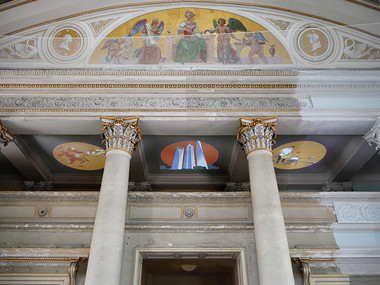 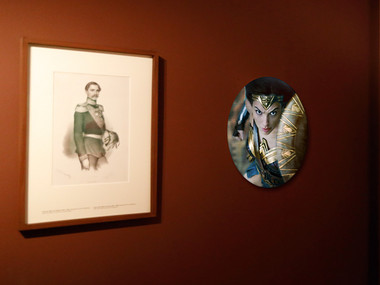 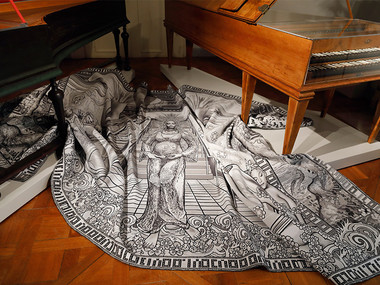 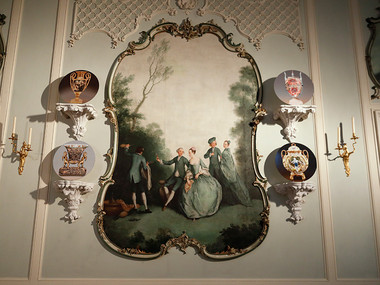 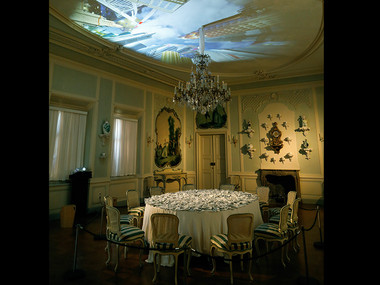 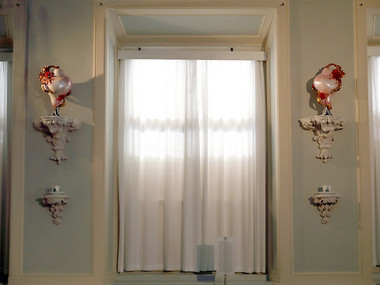 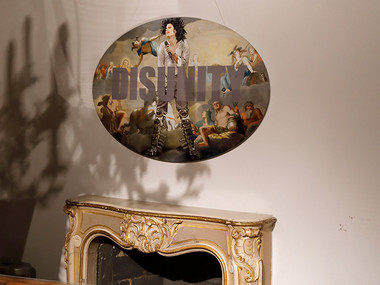 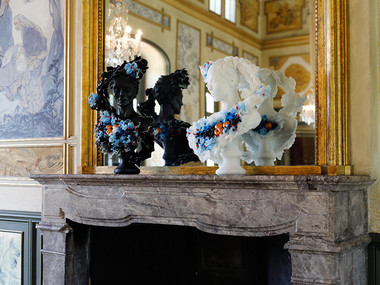 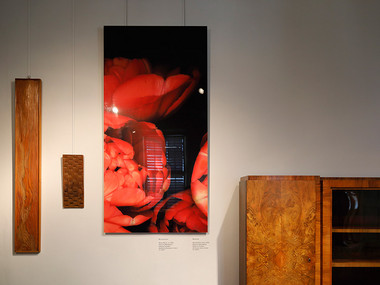 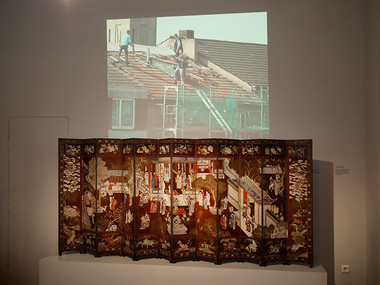 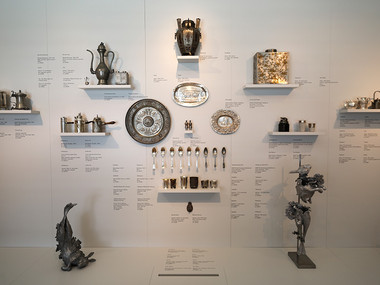 ‘Artists’ Conquest’ is the first in a new exhibition series organised by Dresden State Art Collections and the State Palaces, Castles and Gardens of Saxony. Contemporary artists create surprise encounters for visitors in the historic and culturally significant buildings of Pillnitz Palace. Taking an approach that is at once affectionate, ironic, provocative and thoughtful, the juxtaposition of the contemporary art with historic surroundings vividly illuminates the connections between past and present.

‘Artists’ Conquest’ aims to open up new ways of seeing and thinking and to challenge preconceptions about historic spaces. The artists’ interventions sharpen the mind and re-focus the vision, generating a new perspective on familiar forms. Art, culture and history combined inspire us to take wing towards this magic.

The digital tapestries of Margret Eicher allude to the function and importance of courtly tapestry in the seventeenth century. In the Baroque era, these tapestries served primarily political purposes. They represented power, communicated ideologies, and through their idealised imagery acted as a form of propaganda. Compare this to contemporary mass media and fascinating parallels emerge.

Eicher draws her subjects from the world of images generated by advertising, journalism, film and the internet. She uses an elaborate digital process to create collages out of these set pieces, then weaves them into tapestries using computer-aided techniques.

The dialogue between Luzia Simons’ works and historical still life painting only seems like a whimsical game. The discovery of the “New World” in the Baroque era – the first wave of globalisation –  brought with it huge economic and scientific revolutions, leading to a whole new world view (Galileo). War and chaos, insecurities permeating all areas of life created a mindset of ‘carpe diem’. It was a time of social upheavals with many parallels to today.

The scanograms of tulips that Luzia Simon creates under the title Stockage refer to the cultural transfer of Asia to Europe, and to the issue of a hyped-up market ‘bubble’ (in 1637, trading in tulip bulbs led to a collapse of the stock exchange).  At the same time, these works make aesthetic allusions to Baroque visual imagery – splendour and transience; the drama of chiaroscuro scenes. In our ‘digital Now’, only the medium is changed.

In Rebecca Stevenson’s sculptures we see an obsessive continuation of Baroque-era excess. Familiar art-historical motifs (a portrait bust or still life) are meticulously re-created and then transformed. Surfaces are cut or torn open and the resulting cavities decorated with luxuriant arrangements of dewy roses and ripe fruit. This overabundance, truly a “feast for the eyes”, veils yet intensifies the suspense generated by the work.

By reversing the traditional functions of a sculpture – the communication of continuity, power and heroism – Stevenson’s works manifest the Baroque object as mutable and unstable. She mostly works with wax, a material that imitates flesh and is associated with transparency and transience. Even when her works are cast in bronze their vulnerable character unfolds a fragile aura, radiating ephemerality, decay and decadence. The sculptures emerging from this process are simultaneously beautiful, uncanny and absurd.

The themes and imagery explored by Myriam Thyes revolve around social and cultural symbols. She works with familiar and powerful signs - motifs and figures from politics, architecture, religion and Hollywood film. At the same time, she seeks out “lost” and “forgotten” symbols that speak different languages from those of power.  Thyes uses video(-collage), animation and photomontage to transform cultural symbols and show them in new contexts. Powerful images thus lose something of their authority, become mobile, permeable and – for us today – productive. Symbols of fixed identities become elements of dialogues.

Thyes’ animation 'Trisolaris Chinoiserie' derives from the chinoiserie frescoes of Schloss Pillnitz. Fragments of these appear on revolving globes, like heavenly spheres. The three globes allude to the science fiction trilogy “Trisolaris” by Cixin Liu. Motifs from the frescoes come adrift from the “planets” and morph into contemporary imagery from China, giving rise to a modern “chinoiserie”. Her film heroine series is shown above busts of former rulers of Saxony.

Are you staying at Dresden for the first time? Just go on a sightseeing tour to visit all the highlights and cultural monuments of Dresden at once. www.stadtrundfahrt.com

By bike or on foot

Dresden State Art Collections
and
The State Palaces, Castles and Gardens of Saxony